Madison Cultural Arts, a 501c3, not for profit organization, was founded in 1994 as the successor to the Madison Arts and Sciences Council. MCA is a small group of Madison and Shoreline residents whose goal is to encourage the creative and performing arts in Madison. The preliminary goal of our organization was to save the Concert on the Green that had occurred on or about July 4th every year for over a decade.

History of the Concert on the Green. In 1994 and 1995, MCA assisted John Herman and the Madison Arts and Science Council to put on the July 4th Concert on the Green. In 1995, the founding group handed over all concert responsibilities to MCA, which retired old debts and reinvigorated the concert. Each year we must raise more money to keep the concert alive and we do so with help from our corporate sponsors, and the Madison Board of Selectmen which contributes logistical and some monetary support. However, the main source of support is from YOU – the patrons who year after year provide a donation in order to set up their chairs and picnics in their reserved seating area in front of the stage.

Donations. Donations are encouraged and can be made by check, made out and mailed to: Madison Cultural Arts, PO Box 67, Madison, CT 06443. Please supply a return address and we will send a letter of acknowledgement for your tax records. 100% of all donations go to the cost of putting on the Concert on the Green in Madison.  Our organization is run entirely by a small group of dedicated volunteers who love the Concert as part of Madison’s Fourth of July tradition. 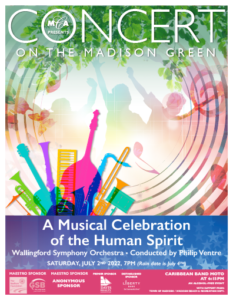 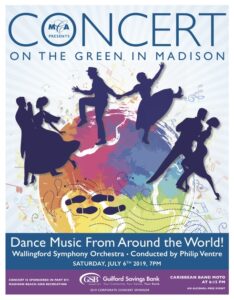 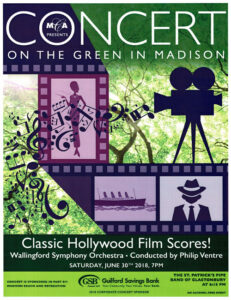 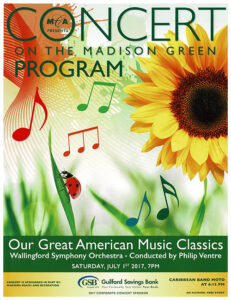 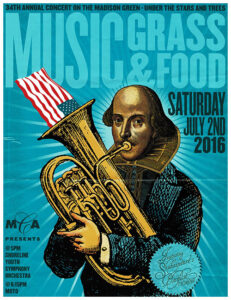 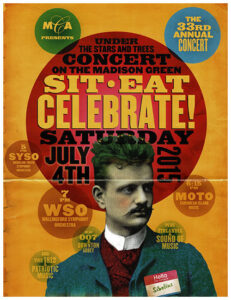